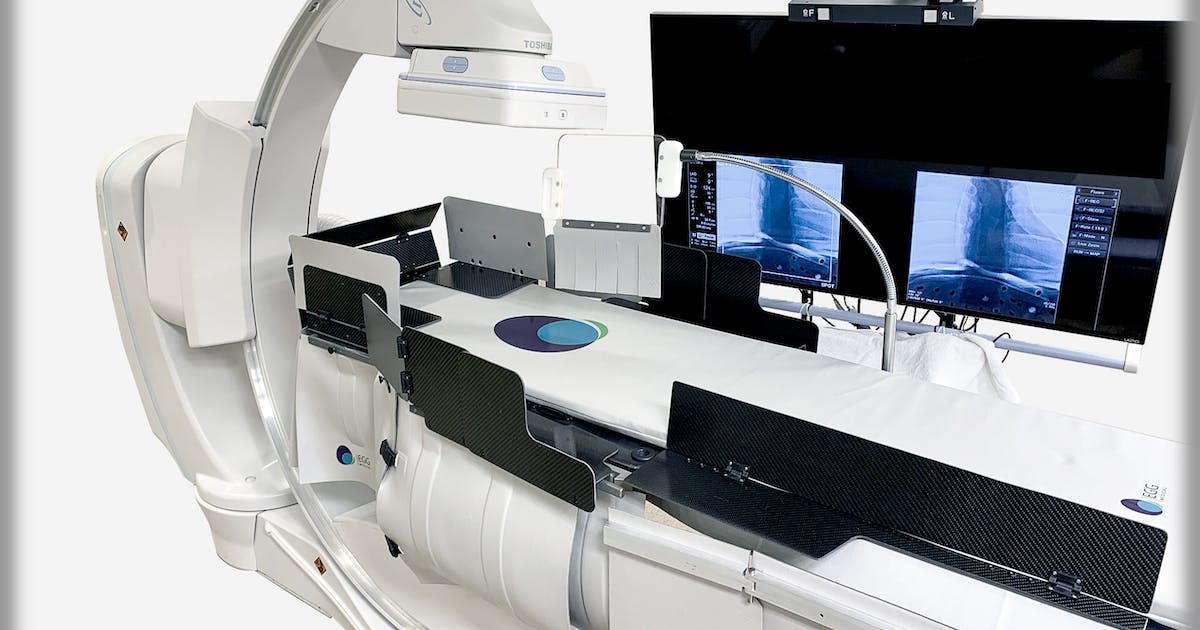 For decades, as cardiac diagnosis and therapies have advanced using X-rays and other imaging techniques, a phenomenon called stray radiation has emerged as a threat to specialists treating a patient.

During an X-ray, the radiation reflects off a patient and scatters off to everyone else in the room. Now, a Twin Cities medical technology start-up, Egg Medical Inc., is expanding sales of a new product that sits on top of an exam table to protect medical professionals from scattered radiation.

“Until now, there was no good solution to the problem,” said Bob Wilson, CEO of the Arden Hills-based company. Typically, doctors and radiologists wear thick lead aprons to protect against radiation.

Called EggNest, the company’s product is a carbon fiber shell that wraps around the mattress and below and above the table. The shields are a composite of polymer and other materials.

Company testing of the product shows a 91% reduction in stray radiation. Wilson said this was to protect everyone in the room without interrupting workflow.

Egg Medical was created in 2014 by two interventional cardiologists and an engineer. Wilson, one of the cardiologists, already has two startups under his belt: Acist Medical Systems, based in Eden Prairie, and HLT Medical, based in Maple Grove. These two companies were acquired by Bracco Group, based in Italy.

Luc Marengère, managing partner of TVM Capital Life Science, said that although this is the company’s first investment in Minnesota, the company already has local connections.

“We have a number of high profile investors in our fund who are based in Minneapolis,” Marengère said.

TVM is investing $12 million in Egg Medical, Marengère said. He is one of two TVM executives now joining the board of Egg Medical.

Wilson said the company and TVM came together in an unexpected way through a “shirt-tail connection” that proved to suit both. “A lot of things in life are random,” Wilson said.

The EggNest system costs $59,000 and there are discounts for volume purchases, Wilson said. The company has sold and installed 35 EggNest systems.

Egg Medical started trying to sell the product in late 2019, just before the pandemic hit. Leaders shifted to virtual sales pitches after the coronavirus spread, the economy stalled and hospitals eliminated most elective procedures.

“We probably did 100 Zoom demos,” Wilson said. Doctors and radiologists, he added, “didn’t do cardiovascular procedures, so everyone had plenty of time.”

Unlike most medical technology companies, Egg Medical did not need FDA approval for its product.

An extensive survey of radiation exposure, published in the American Journal of Roentgenology in 2017, determined that the two biggest risks were cataracts and hair loss.

Cancer was a concern in the past when the risks of radiation were less well known. But the AJR article noted, “There is no credible evidence of an increased risk of cancer among radiologists who have practiced for the past 30 or 40 years.”

Dr Nicholas Burke, a local cardiologist, said he started using an EggNest in a lab over a year ago. Burke works with both Abbott Northwestern Hospital in Minneapolis and Ridgeview Medical Center in Waconia.

“We redid the lab there [in Ridgeview] and I said, “I want the EggNest installed in the new lab,” Burke said.

Burke had professional relations with Wilson through the University of Minnesota, where Wilson had long been a professor.

“The scientific studies that have been done demonstrate a dramatic decrease in radiation exposure for people who work in the cath lab – doctors, technicians and nurses,” Burke said. “That’s why I’m a fan.”